Courses for Young People who stammer

Jack Turner on This Morning

A little time after his first Starfish course Jack Heal-Turner decided to speak about his story of stammering and finding help to control his stammer from The Starfish Project. We are so proud of Jack, the courage he showed in doing this and all he has achieved since. Please take the time to read his mum's introduction and watch this incredible piece of film.

How it all started

Following the numerous national newspaper, magazine, radio and television articles, reporting successful training in stammering control available from the Starfish Project, we were requested by a large number of parents to start courses for young people who stammer.These parents were all very concerned about the lack of speech therapy facilities, for their children, in their own home areas within the health service.

After months of discussion and planning we were proud to announce the first ever STARFISH young peoples course. We had decided early on that three important fundamentals were:

We told each parent, at the initial course discussion stage, about a parent being present; all of them thought this an excellent idea and were 100% for learning the technique to back up their own child.

With regards to ensuring a one-to-one training ratio, our only problem was that so many people that had been on the course wanted to come back, giving up their own time and at their own expense and help. As one trainer said "I will do anything to help, if I can help stop one person having to go through the years of stammering that I did, it's worth everything to me".

On a Tuesday at the end of August 2001 fourteen young people 12 -16 years old, accompanied by a parent, arrived at The Boship Farm Hotel in East Sussex having travelled from as far as Guernsey, Ayr, Swansea, Exeter, and Cumbria. From such diverse backgrounds, the one thing all these young people had in common was that they stammered, and really wanted to get control over something that was controlling them. They wanted to control stammering. 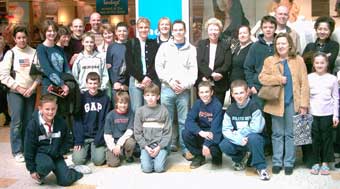 The three days of the course were a joy; never before had we seen such dedication, enjoyment and true friendships forged as they all worked hard and helped each other. All of the young people gained control over their stammering and changed in those few days in attitude. Most of them didn't even realise what different people they had become as they started the long journey back home to their families. Their attending parents had seen the change and some just couldn't believe it. As one parent said "It's as if a concrete block has been taken off his shoulders".

On Friday the 31st of August those fourteen young people left, not only equipped with a technique and safety nets to control their stammer but also walking a lot taller, and sure in the knowledge that they had support free for the rest of their lives.

Since that first course in August 2001 we have gone on to run Starfish Project Young Person's Courses every year.

Click for Your Questions Answered about Starfish Young People's Courses